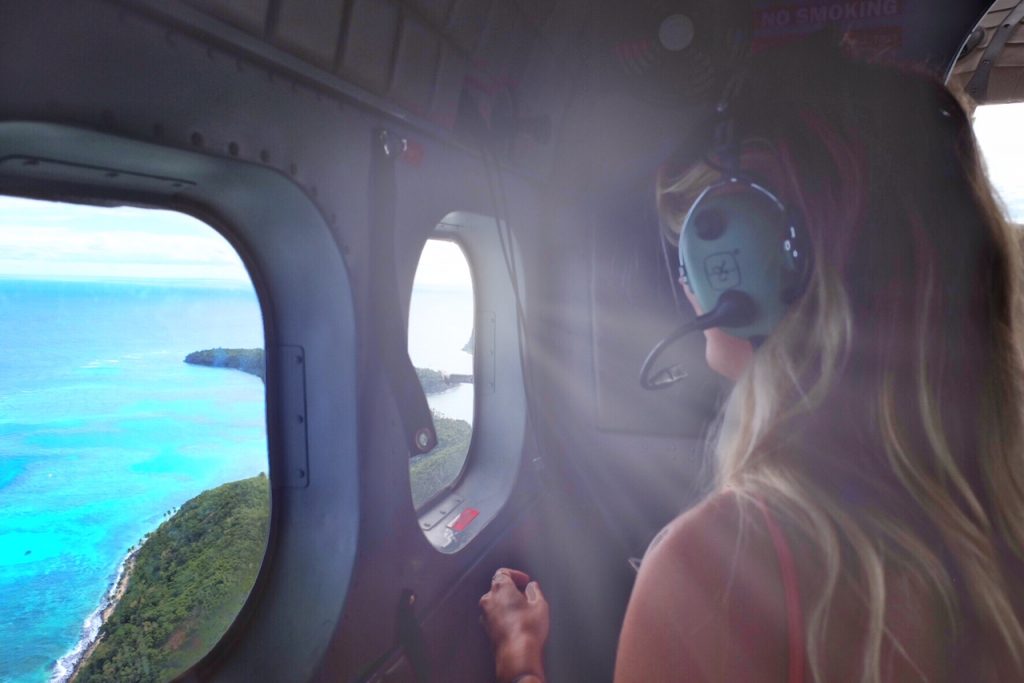 The minutes passed like hours on the drive from the airport to my resort in Fiji. After spending the last week walking up and down the freezing streets of Melbourne in a leather jacket and backless mules, I was lusting for Fiji’s crystal clear waters and a cushiony sunbed with my name on it.

I arrived at my resort, lined with flaming tiki torches and covered in vibrant, pink hibiscus flowers and I could hardly wait to get out to the pool, take in those ocean vibes and order a pina colada! Once I arrived at the oceanfront, I realized the Fiji I saw was not the Fiji I had imagined. The water was murky, the skies were grey, and there was no snorkeling anywhere near the resort.

Panic swept over me as I realized I made a major mistake. Due to complicated flight times and limited time I had to research this leg of my month-long trip to Oceania, I had booked my stay on the main island, Viti Levu, rather than venturing further out.

The trick to visiting paradise is you have to get away from the mainland. I learned this last fall in French Polynesia. The most stunning beach was a ninety-minute boat ride into the abyss from the already-remote island of Rangiroa! Tahiti, the capital where I flew in and out, was far from that.

I needed a place where the water was fifty shades of blue, but Fiji is larger than it seems. Getting to the remote islands from the mainland can take half a day by boat! My resort was also pre-paid, so moving hotels was not an option. I needed a daytrip, and fast. I opened my laptop and frantically searched for a way to fix my mistake, which is how I discovered Pacific Island Air.

*Pacific Island Air Fiji hosted me on this excursion, but all opinions and thoughts are my own.

Pacific Island Air offers a few different day-trips to the most remote areas of Fiji. This means you can visit the most beautiful, secluded islands from the mainland in one afternoon via sea plane! This means you have an experience flying over the incredible reefs, atolls, and volcanic islands. I chose the trip that would allow me to swim with manta rays. This included sea plane transfer to Manta Ray Island, a gourmet lunch, guided snorkeling, and hopefully a swim with the mantas. 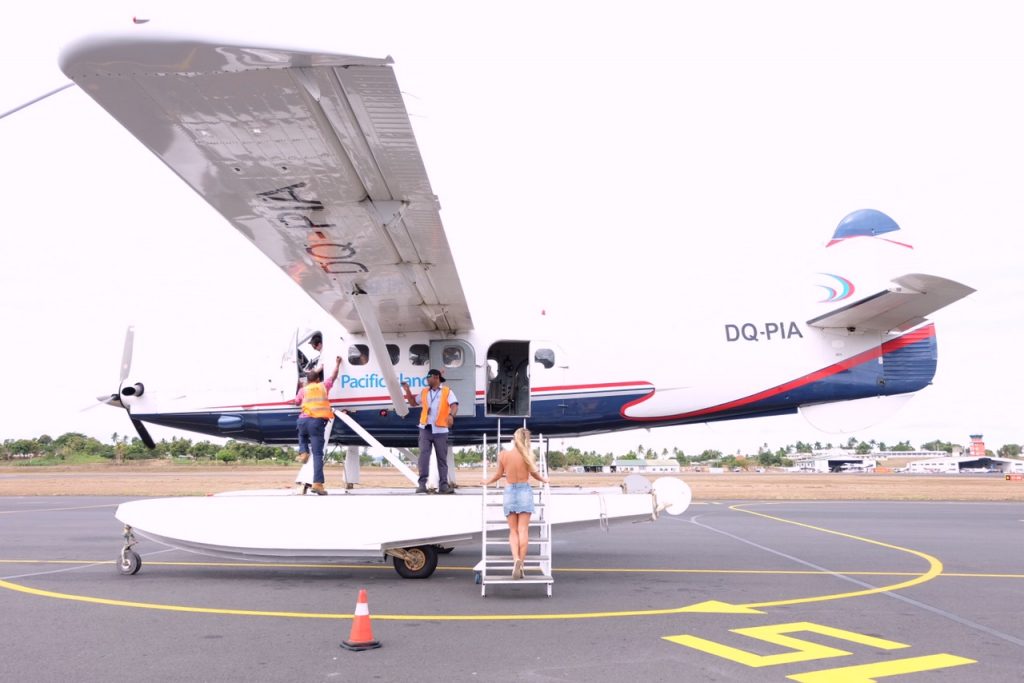 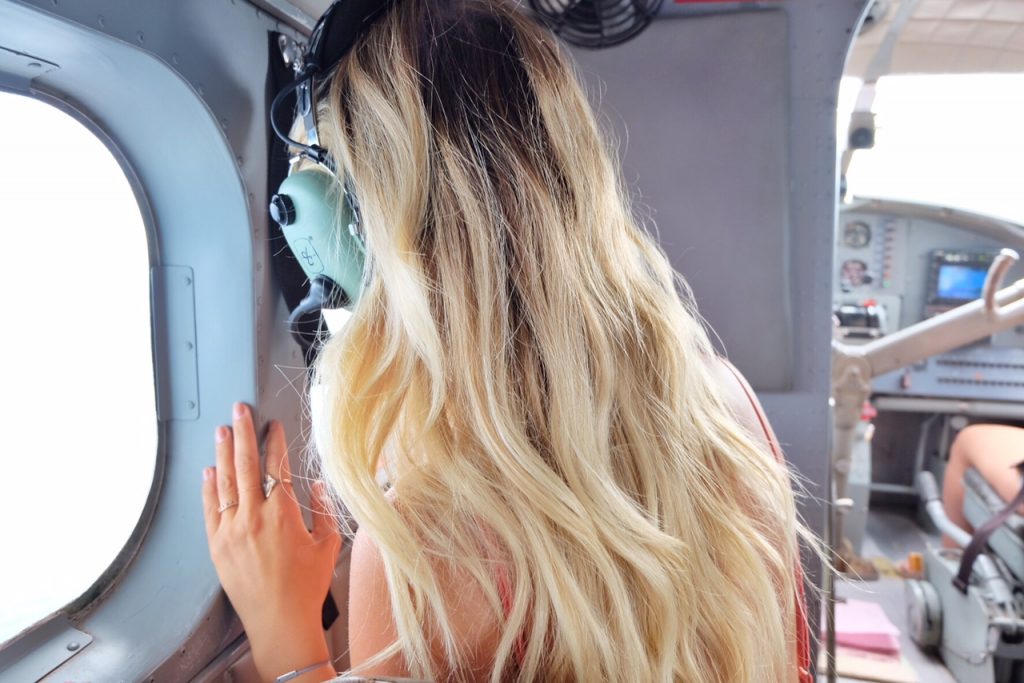 A car picked me up for a transfer to the domestic wing of the Nadi airport, essentially a thatched hut with a check-in desks and an ice cream cooler; making it the best airport ever! The check-in process included giving our name and hopping on the scale to be weighed for the flight’s manifest. Then we walked right out the door, and onto the seaplane, where the barefoot Captain invited me to take the co-pilot seat. I found myself wishing that every flight could be like this! 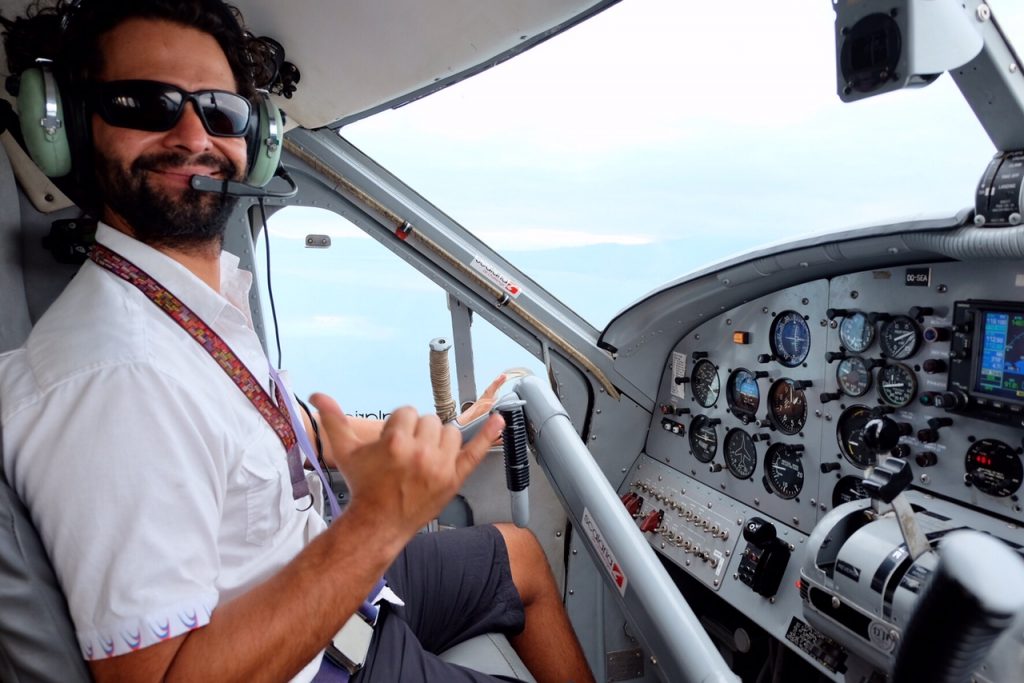 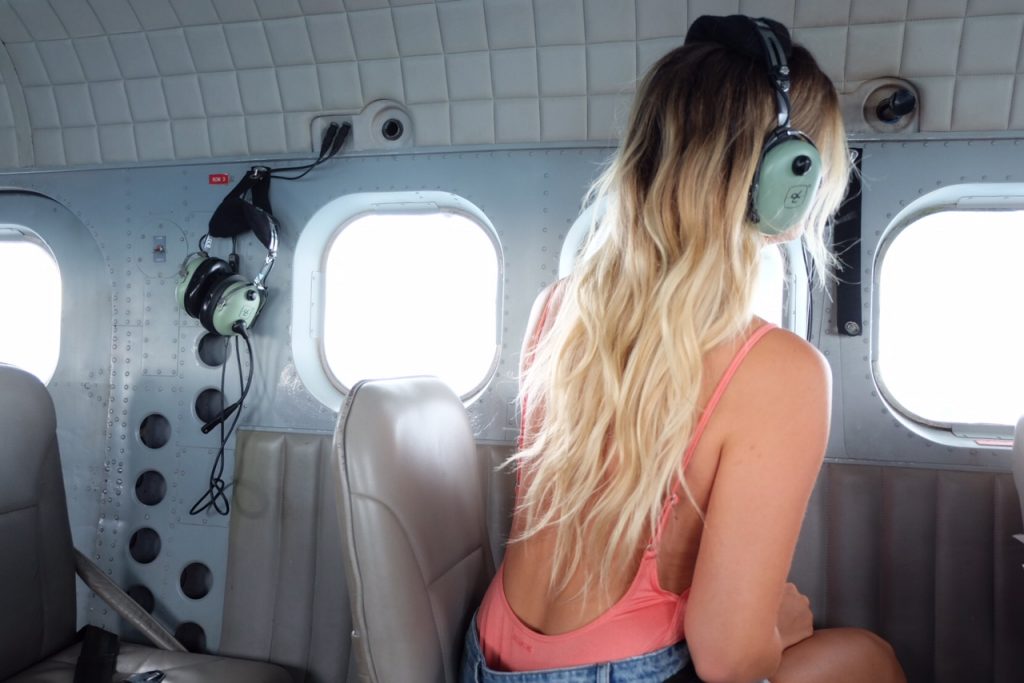 To see a group of islands from the air changes everything. Soaring over each one, looking down at the ocean and reefs below, I was in awe of the beauty. This is the Fiji I had imagined! As a frequent flyer, I’m used to take-offs and landings, but I’ve never experienced one on the water! I was never so happy I had a window seat. Suddenly my view became nothing but the ocean, and the plane hovered above the water making a massive splash before coming to a stop. The captain hopped out onto a small walkway and opened up the door and pulled down the stairs. A boat met me plane side, and took me the rest of the way to the shore where there was white sand, bits of coral washed up on the shore, and water so clear it glowed turquoise blue. This is what I crossed the globe for! 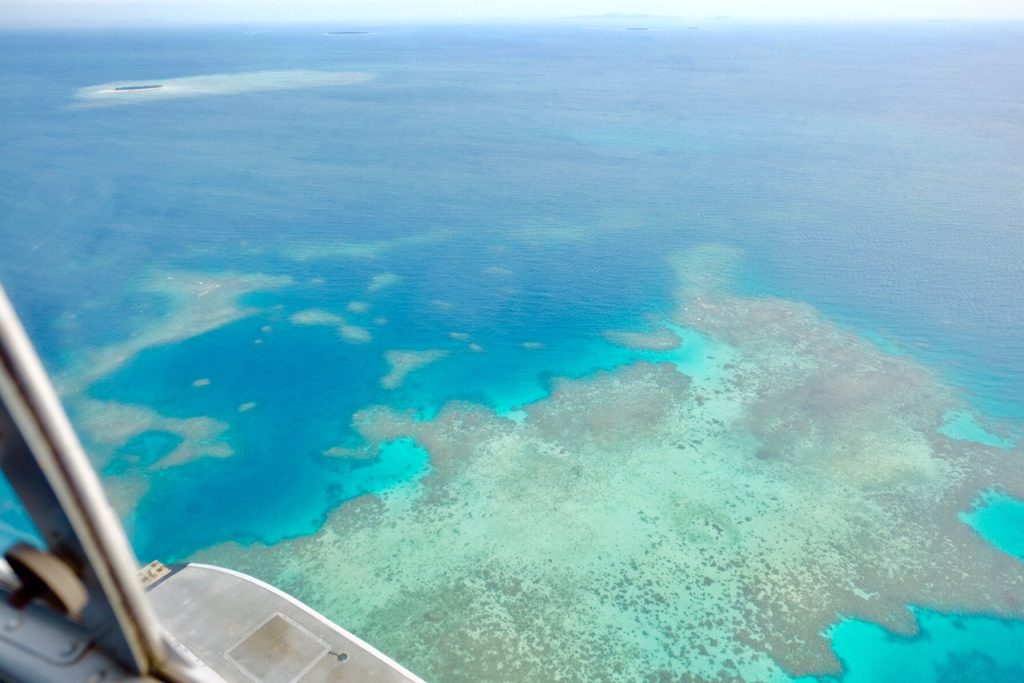 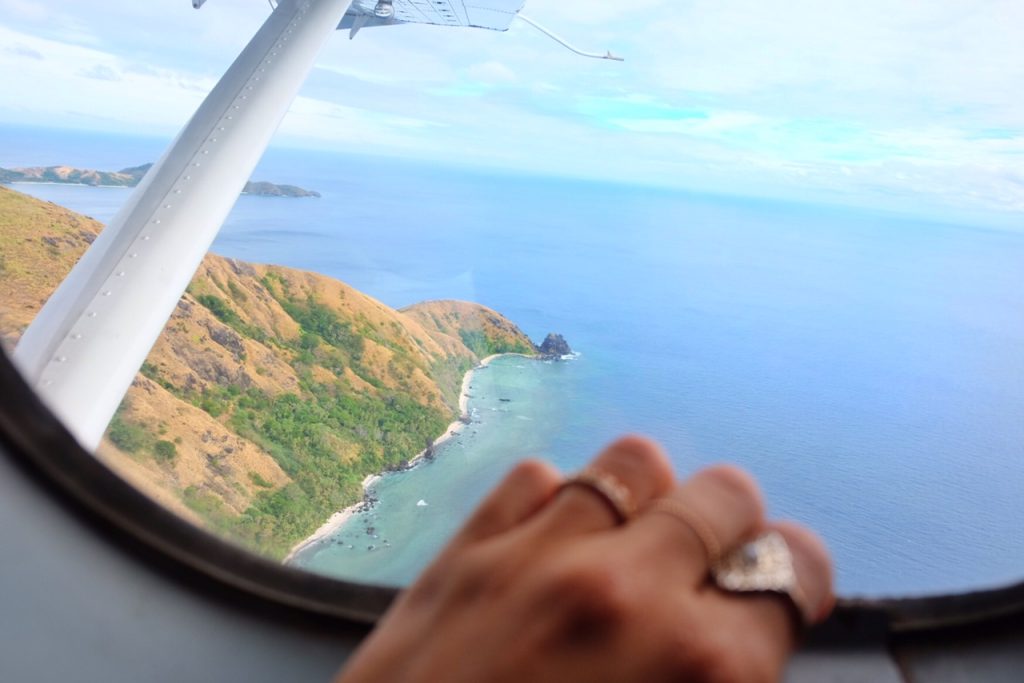 Manta Ray Island is the very definition of laid-back Fiji. The friendly staff greeted us with a song on arrival and soon a welcome drink was in my hand. There are a few bures or bungalows scattered across the white sand: a bar, a dive shop, a restaurant, and a reception desk, and beach chairs right at the point where the crystal clear waves meet the sand. It’s so picturesque, it felt surreal. White beaches scattered with chards of coral, glowing blue water, and the hot-pink hibiscus flowers made famous by the Fiji Water bottle. 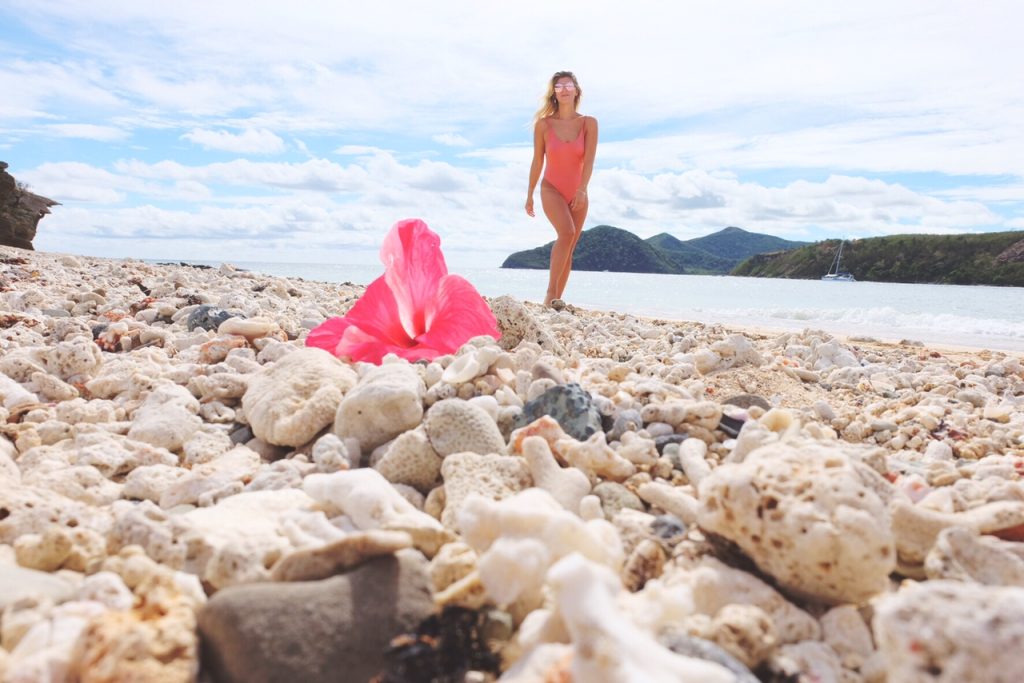 Pineapple Joe introduced himself as our snorkeling guide. Half the men on the island had the name Joe, so to keep each other straight they adopted various fruit-themed first names. There was Pineapple Joe, Coconut Joe, and Banana Joe. Pineapple Joe earned his nickname because of his haircut.

He explained the first part of the day was ours to do what we wanted; the resort offered diving, paddle boarding, bracelet making, cooking classes, and even a tour to a nearby village to see how the locals live. I spent the first hour on the island the way everyone should spend time on holiday: relaxing in a hammock with a pina colada. 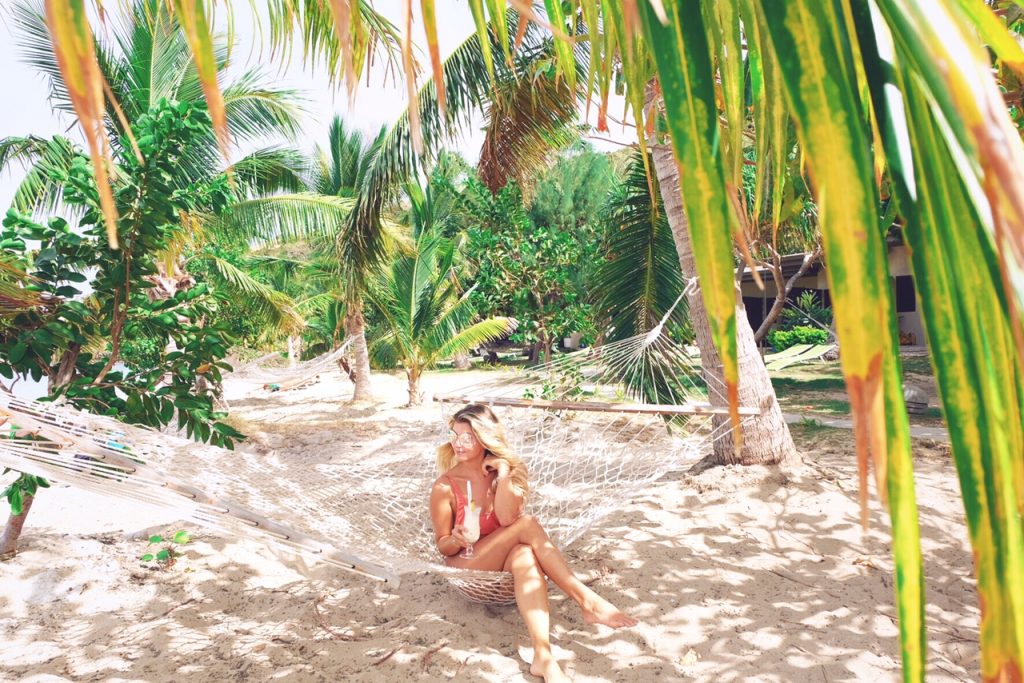 Fijian cuisine is something for any foodie to experience. Fresh fish, fresh coconuts, and cassava are staples of their diet and made for meals that had me licking my plate when no one was looking. The chef at Manta makes a few specials every day for lunch depending on his mood and what’s fresh from the sea. 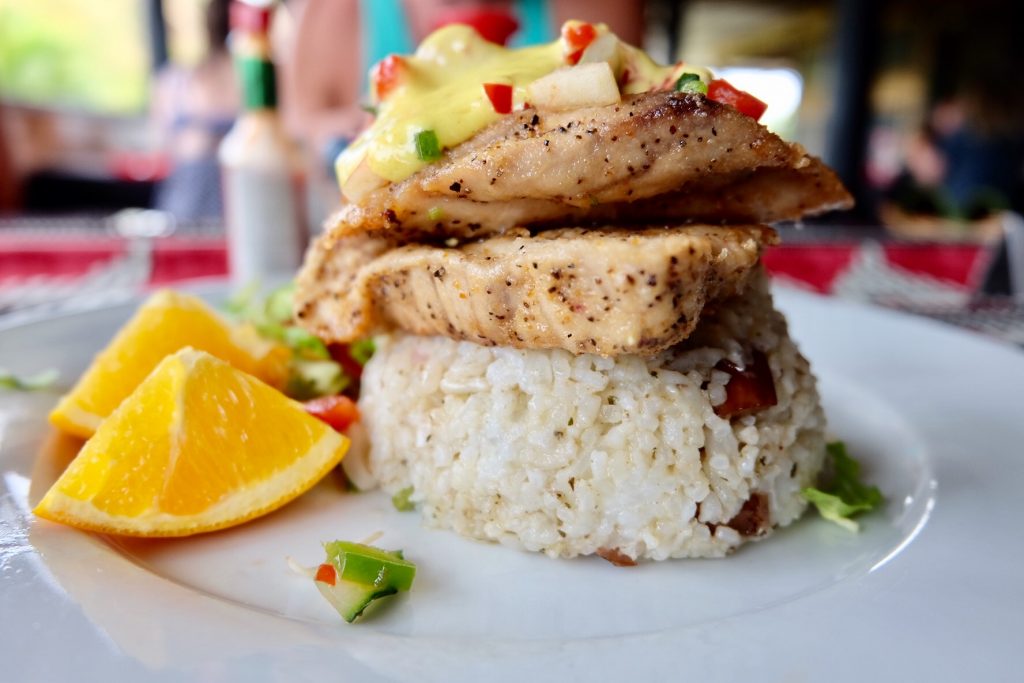 After lunch, Pineapple Joe fitted me with snorkeling gear and we climbed into the boat and headed to the manta ray channel. Like all wildlife sightings, there are no guarantees; this part of the island is where the manta rays pass, but sometimes they are not there. We cruised through the channel looking for signs of them. However, they were clearly busy in another part of the ocean. 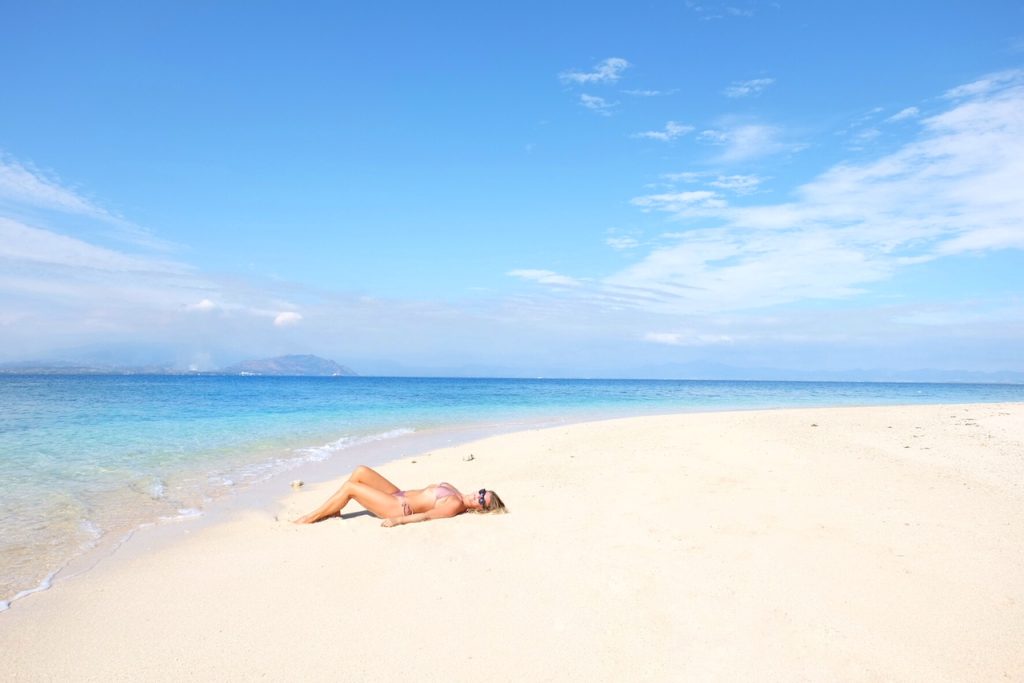 Fins and gear on, we jumped out into the channel anyway, and I can’t even pretend I was disappointed. What we did find was the most incredible, lively coral reef I’ve ever seen. I felt like the Little Mermaid during “Under the Sea!” The reef went on for what seemed like a mile, and became richer with color and life every stroke I took. Enormous purple starfish, electric blue eels, sea urchins, reef sharks, lion fish, and even two clown fish that had to be the real-life versions of Nemo and Marlin. I made my first attempt at free-diving so I could swim closer. Pineapple Joe had to pull me out of the water, grinning ear to ear. Born and bred in Fiji, he’s totally spoiled for scenery and snorkeling! He laughed at my enthusiasm, asking “first time snorkeling?”

“No, I’ve snorkeled in the Maldives, Costa Rica, Mexico, Bora Bora, but this was my first time snorkeling like that!”

As our boat approached the seaplane, I noticed the Captain, barefoot, opening the stairs for us passengers to load back in. As he helped me back into the plane he asked, “Want to be my co-pilot on the flight back? ”Maybe he sensed my sadness that the day was drawing to a close, or maybe Pacific Island Air is just in the business of making dreams come true. Either way, I flashed him a ginormous smile and said, “I would never turn down that opportunity!”

For what to wear on a beach trip, read our style guide! 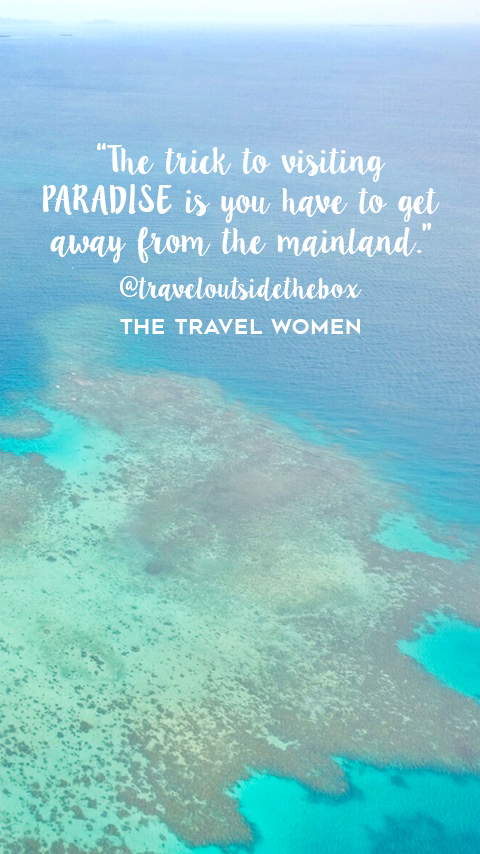 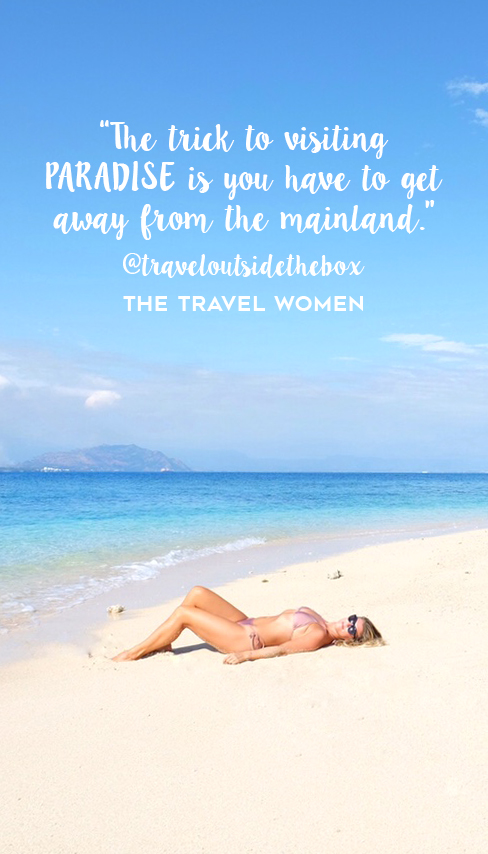