NYC Subway secrets are hidden everywhere both in plain sight, like the old Knickerbocker Hotel door, or deep beneath our feet, in old abandoned tunnels. If you have ever ridden the NYC subway then you know it is unlike any other transportation in the world, not always for the better. Learn why we swipe MetroCard’s and what came before them: the tokens that were only phased out in 2003. Helpful tips to know include a “late letter” for work, bars in old tunnels, the pizza connection and more. Let’s get back on track!

You can enjoy a drink at a bar in Brooklyn in one part of an old railroad tunnel beneath Atlantic Avenue. Le Boudoir is a Marie Antoinette inspired cocktail bar with a powder room in the tunnel’s old coal room.

The MTA used to run a “Miss Subways” beauty pageant for over 30 years. From 1941 to 1976, the “Miss Subways” pageants were used in advertising to draw attention to ads. It was even brought back once in 2014 for the NYC subway’s centennial.

There is a secret train platform, track 61, connecting Grand Central and the Waldorf Astoria for rich passengers and presidents like President Franklin Roosevelt. In 1965 Andy Warhol even hosted an underground party on the platform!

City Hall Subway Station is the famous abandoned station often included in movies for it’s beautiful vaulted architecture. It opened in 1904 but was decommissioned in 1945 because its curved track was not ideal for new, longer trains. You can still see the abandoned City Hall Station on an annual tour or you can see it by staying on the 6 train after its last stop at Brooklyn Bridge/City Hall as it turns around to go back uptown.

One abandoned station, the old Myrtle Avenue Subway Station in Brooklyn, is now like a mini art gallery that entertains riders with a Masstransiscope of 228 hand-painted images that look like an animated cartoon. See it by traveling from the Dekalb Avenue subway stop towards Manhattan on the B or Q trains.

Before the subway system we know today, there was a prototype subway run on Pneumatic power, like the kind Elon Musk is working on, called the Hyperloop. In 1870, Alfred Ely Beach launched Beach Pneumatic Transit, the city’s first underground transportation. It ran only one city block but used compressed air and water pressure to propel a single train car forward. Beach built the track in secret as a demonstration of how it could work. Though it only ran for 3 years, this is the system that is used to push mail through tubes today. Walking on this quaint Brooklyn Heights street, you might notice one brownstone looks a little different. The MTA owns a fake brownstone at 58 Joralemon Street with blackened windows in Brooklyn Heights which just houses electrical equipment and a secret entrance to a subway tunnel.

The Times Square 42nd street station has its own private Knickerbocker hotel entrance. It may not be super-secret as it is labeled clearly, but it has been long forgotten and many commuters don’t even notice this white door. Read next 11 Things You Don’t Know About Times Square.

There used to be an armored money train which transported the subway and bus fares six nights per week from 1951 to 2006 to a secret room at 370 Jay Street in Brooklyn. If you’re late to work because of subway delays the MTA can email you a “late letter” often same day explaining why there was a delay. I have been late to work many times due to train delays but I’ve never tried this.

11. Why is NYC subway underground and the local name for elevated

12. Why do NYC subway conductors point at the black and white striped board?

There is a black and white striped board in the middle of every subway station that the conductor needs to point at to show it stopped in the right place on the platform. 13. Busiest subway in the world?

NYC’s subway is the busiest in the US with 1.7 billion riders each year, but it is only the 7th busiest in the world, with Tokyo stealing first with almost double the number of riders.

Times Square is the busiest subway station in New York with 63 million riders per year.

Many walk right past this without realizing that this is a real Lichtenstein entitled “Times Square Mural.” Take the escalator down and walk towards the S train to see this energetic artwork. It features a futuristic bullet train and incorporates the iconic 42 image from a series of early architectural drawings of the subway. The New York Pizza Connection is a very serious economic principle that states the average price of a slice of pizza matches the cost of a ride on the subway. They usually increase at the same rate.

In 1953 the subway began to take tokens instead of coins when the fare was raised to 15 cents since turnstiles couldn’t accept two different coins.

18. Why tokens were discontinued after creative thefts?

Tokens were easier to steal; some criminals would jam turnstiles then suck out tokens with their mouths. Workers would see this and often put chili powder or mace in the slots to combat thieves! 19. When did MetroCard use start in NYC?

Tokens were officially deemed obsolete in 2003 after MetroCards were widely in use.

20. Can the MTA track a MetroCard swipe?

A MetroCard swipe is tracked and was an alibi to successfully acquit someone of a crime.

44 old subway cars were dumped into the ocean off the coast of Maryland to become an artificial reef in 2008. There’s a New York Public Library in a subway station. Find this small library branch entrance at the Lexington Avenue/53rd Street Subway Station, before you need to swipe your metrocard. The entrance is beneath the 6 downtown entrance at the Northeast corner of Lexington and 50th Street.

23. Vintage train cars and buses for the holidays

You can ride a vintage nostalgia train for the holidays. This is less of a secret but more of a fun surprise if you’re on the platform and don’t know about it. Every weekend from Thanksgiving to Christmas the MTA runs a fleet of vintage train cars and also vintage buses that allow people to step back in time. My biggest advice is to look at the schedule ahead of time and get there at least half an hour before the train departs for photos and to mingle with the characters dressed in era garb.

The owner of the IRT company had his own private subway car called the Mineola. August Belmont, Jr., rode in his own private car which included a bathroom, kitchen and wooden desk. It was recently rediscovered at the Shoreline Trolley Museum in Connecticut and is being restored.

25. If the L shutdown happens what is the Underbelly Project under Williamsburg South 4th?

Underneath South 4th Street in Williamsburg there is a 6 track station from the old IND line that never opened, but in 2009 was transformed by 100 artists into an underground gallery called the Underbelly Project. It is now sealed, but likely fully untouched.

The NYC subway has evolved a long way since it opened in 1904. Some developments never saw the light of day like the Pneumatic power subway to the South 4th Street station that would greatly help with the L train renovations. While other subway tips and tricks are fully available to everyone like getting a “late letter” for work and the holiday vintage trains.

Read next: 25 Subway Tips and Tricks or 11 Things You Didn’t Know about Times Square 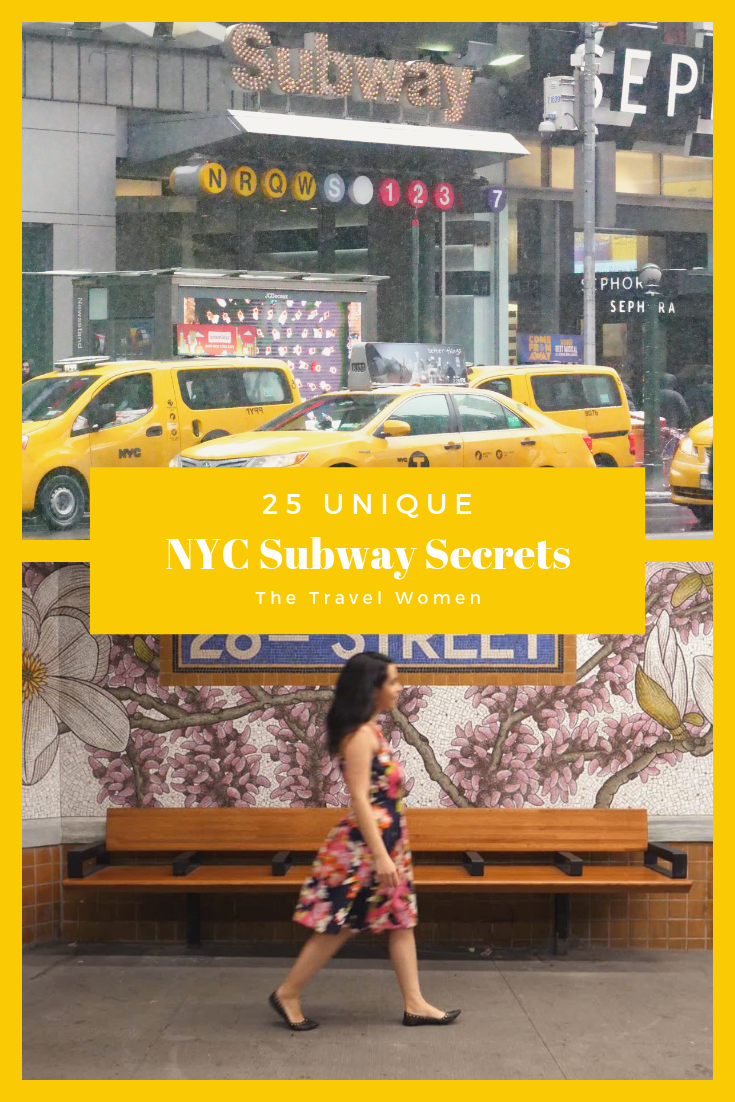